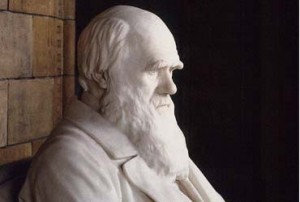 The name Charles Darwin is virtually inseparable from the debate of origins. Even if his evolutionary hypothesis was unoriginal in itself, Darwin has proved to be the most effective (and thus most memorable) communicator of the concept. As a literary figure, Charles Darwin accelerates his proposition by defining the debate. Since the initial evolutionary model is more so a reinterpretation of observations in the natural world than an actual confounding discovery, monopolizing dialogue on the issue is understandably the smartest route to take while introducing a topic in the speculative Victorian era.

When analyzing the writings of Darwin, it is insightful to keep in mind that he has not been trained as a scientist, but as a clergyman. Darwin, as theology-student-turned-naturalist, writes to make disciples of his scientific “gospel”. He seeks common ground with readers by addressing them as co-observers, telling them “[w]e will now discuss,” “[w]e behold,” and “we often see” (1539) the struggle for existence and the minor changes within species that occur because of it. This easily comprehensible beginning sounds non-threatening enough, and offers a launching pad for a more radical extrapolation. “I see no good reason why the views given in this volume should shock the religious feelings of anyone,” (1541) says Darwin, beginning the fifteenth chapter of The Origin of Species. This brush with religious sentiments is a hint of what Darwin uses to define the debate.

Like an astute lawyer preparing a case, Darwin anticipates what the opposing or skeptical arguments will be. He admits repeatedly what “may be asked” (1542, 1543), and insists that although he is “fully convinced of the truth of the views given in this volume under the form of an abstract,” (1542) he doesn’t expect to convince those naturalists who have far more experience than himself. It is interesting that Darwin, who has been called a humble researcher, acts submissive to the authority structure of scientific academia even as he subtly dismantles and refashions it. Immediately after acknowledging more experienced naturalists, he says that naturalists “endowed with much flexibility of mind” and perhaps “young and rising naturalists, who will be able to view both sides of the question with impartiality” (1542) will be open to accepting his theory. Twelve years later, Darwin takes an even more assertive stance in The Descent of Man:

“The main conclusion arrived at in this work, and now held by many naturalists who are well competent to form a sound judgment, is that man is descended from some less highly organized form. The grounds upon which this conclusion rests will never be shaken…” (1546)

In other words, Darwin has concluded and now preaches that the debate has already been settled within science. The debate is now essentially defined as between the scientific and the non-scientific, the skeptical and the religious. This is where the awkward vacillations begin. Darwin thinks that the evolutionary explanation of mankind’s descent from apes may “be highly distasteful,” (1549) but tells his readers not to worry about it affecting religious views. Yet he also admonishes that it is “so easy to hide our ignorance under such expressions as the ‘plan of creation,’ ‘unity of design’ &c.,” (1542). One is thus left under the impression that no competent scientist will disagree with Darwin, and that one’s religion must be reconciled with the evolutionary model if one intends to keep it. With unsettled aspects of the debate being mainly a problem of the non-scientific, Darwin ventures to seal his evidentiary theses with defenses of the propriety and superiority of man:

“For my own part I would as soon be descended from that heroic little monkey, who braved his dreaded enemy in order to save the life of his keeper; or from that old baboon, who, descending from the mountains, carried away in triumph his young comrade from a crowd of astonished dogs – as from a savage who delights to torture his enemies, offers up bloody sacrifices, practices infanticide without remorse, treats his wives like slaves, knows no decency, and is haunted by the grossest superstitions.” (1549)

This appeal to progressive sentiments makes for a persuasive maneuver in cultural debate. Thomas Huxley gladly inherited Darwin’s pride in monkey heritage in the 1860 debate at Oxford. Huxley, known as “Darwin’s Bulldog,” is representative of a particular audience drawn to the evolutionary doctrine of origins. Darwin argues that evolution should make mankind feel noble, because man’s evolution to the “summit of the organic scale…may give him hopes for a still higher destiny in the distant future” (1549). This idea sounds absurdly fanciful to some, but is readily embraced by others, especially disillusioned thinkers who want a void in their lives to be filled with meaning. Darwin essentially fills this void by deflating it – if there is no intricate plan for the universe, and thus no individual plan for our lives, there is therefore no need of salvation except by man’s own power and struggle for survival.

The premise of Darwin’s The Origin of Species is that the observations he made initially in the Galapagos might shed some light on that “mystery of mysteries” – the origin of species. Judging from this inquisitive approach it becomes more apparent what sort of audience this book will appeal to. Those who believe in a literal interpretation of the Bible are not likely to find the origin of species to be a “mystery of mysteries,” because the Bible offers the explanation that God created every living thing according to its kind. But skeptics who are disheartened towards or doubtful of the existence of God will immediately feel a kinship with the author.

Notice, however, that Darwin is careful not to dismiss God entirely. Whether or not he still personally believes in “the Creator” he mentions, or is merely trying to sound culturally acceptable is not immediately apparent. But Darwin does make the well-known Creator of the Bible seem less likely, because the evolutionary model diminishes the role of a designing God. In light of this conclusion, the references to “the Creator” sound equally diminished. Perhaps Darwin is willing to use them as a sort of classical idiom, just as the Greco-Roman gods and goddesses are utilized by poets and lyricists. He also refers to man’s “godlike intellect” and “exalted powers” (1549), which shows how difficult it is for even the most secular author to avoid communicating with religious connotations.

Viewing the origins debate as an issue of limited dimensions has been a fashion of the past century, with a tacit aspect of culture being to not bother questioning scientists unless one is prepared to reconcile their religious views. The success of the evolutionary model may be credited to Darwin’s success at compartmentalizing the issue between those working in the field of science and those who are not. This makes evaluating Charles Darwin as a literary figure an intriguing venture. It is surprising to find that the roots of the debate are just as (if not more) metaphysical and emotional as they are scientific.

This essay was written for an English Literature class in Spring 2010.  Yes, there were all those exciting poets and novelists to choose from, and I found myself writing about Charles Darwin.  Sad, isn’t it?  My professor responded with:

“This essay gives a very effective analysis of Darwin’s rhetorical strategies. I don’t know that his tone of humility is disingenuous. Maybe he felt genuinely awed and humbled when he realized the implications of his discovery. Rather than sounding combative or exasperated, his tone is usually patient. (But note the cultural prejudice in his grimly comic description of savages.) Shelf after shelf in the basement of Candler theological library at Emory is filled with Victorian tomes attempting to reconcile religion and Darwinism. Somebody should read them all and write a dissertation.”

May I take a hint?  I’d love to go to England anyway.